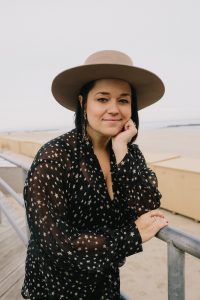 As long as she can remember, art and design have always been a part of Karisa’s life. Instead of formal pre-school, Karisa was enrolled in art school. Throughout her younger years, she was constantly creating and making, which eventually lead to an interest in fashion design.

At the young age of 17, Karisa began taking weekend and summer classes at both Parsons and The Fashion Institute of Technology in New York City. These classes really lead her to decide to pursue a career in the design industry. During her creative pursuit, she continued other artistic passions, such as painting, illustration and photography. 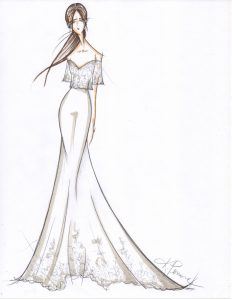 Karisa made the decision to further her education by attending the prestigious Parsons the New School for Design, in New York City. While there, she majored in fashion design. She invested her time outside of the classroom interning at famed design houses such as Diane von Furstenburg and Michael Kors. She took advantage of the schools study abroad program and attended Parsons Paris, in Paris, France. While in Paris, Karisa gained skills and inspiration that she would take with her into her future career. Karisa graduated from Parsons with high honors and a Bachelor of Fine Arts degree.

Upon graduation, Karisa took a job designing for one of America’s top bridal manufactures. There, she gained invaluable experience, working in NYC and traveling to Asia to work one-on-one with factories on design, construction and fit. She was also fortunate to travel all over the world, looking for inspiration everywhere she went.

Today, as House of Wu, Karisa loves to combine fashion forward ideas with timeless sensibilities. She loves to help brides feel like the best version of themselves on their wedding day. Her ideas are constantly forward thinking while she pays great attention to detail and quality. Karisa is always excited to constantly look for inspiration and begin her next collection. 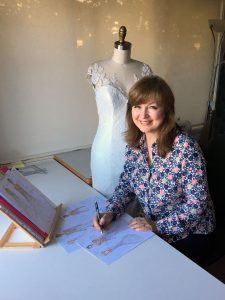 Tania was creative from a young age. She was gifted in drawing and art and she always had a great eye for detail. Tania began her career in Ukraine studying sketching, drawing, painting and craftwork from 8 years of age.

“I was sketching designs for my girlfriends at school when I was 10.”

Tania was always passionate about fashion and dedicated to learn as much as she could from every source available. She learned knitting and sewing very early in life and started sewing her own clothes at 13.

“My first experience was when I sat with my grandmother and witnessed the wonders of design and patternmaking coming alive. The whole process of creation was amazing for me.”

After completing her schooling, she continued learning her profession at Art Technical School and later attended university to study Fine Art and Design.

As her experience developed her clientele increased and she began working privately. She moved to Australia in 1999 where her knowledge and experience opened doors to the fashion industry. She then worked as Head Designer for labels such as Vicky Mar, Barbra Calabro and Maggie Sottero in Sydney.

Tania is passionate about timeless designs and elegant silhouettes with a modern touch. Her inspirations are, but not limited to, Reem Acra, Marchesa, Michael Cinco, Elie Saab and Zuhair Murad.

Tania is a very hands-on designer, doing her own lace placements, draping and correcting patterns on the spot. She brings a vast amount of experience and knowledge to House of Wu where she designs Bridal gowns and Mother of The Bride outfits. 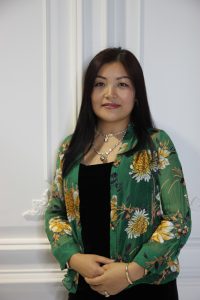 Liz Luo was born and raised in Wuyi Mountain at FuJian Province China before she migrated to California in 2007.

Liz began her career studying portrait sketching at Shanghai Academy of Fine Arts University, one of the most influential and best-known colleges of art and design in China. Upon graduating, she learned about an opportunity to work for House of Wu from a friend employed by the manufacturer in China. She worked at a fashion factory in China, and has assisted, styled, and labored in the fashion world.

Women’s Fashion Designer, Liz, has been at the forefront of the fashion industry, showcasing her newest creations in the bridal, Quinceañera and Prom industry. A veteran in the fashion world with over 20 years of designing experience, Liz seeks to fulfill her vision to successfully market her work all over the globe.

Liz has worked at House of Wu for 20 years, and is one of the longest working designers for House of Wu. She is the designer for Christina Wu Brides, Tiffany Designs, Tiffany Princess, Pageant, and Quinceañera Collection.

Liz focuses every design on flattering a real woman’s body. Her knowledge of a garment’s proper fit and design, combined with her innate creative abilities, results in an effortless and wearable line that reflect the kind of woman she is herself; strong, sexy, fun, full of passion of work and is fearless.

“It brings me so much happiness designing these beautiful and elegant dresses for young women,” said Liz. “My favorites are the young women who are going to their very first prom and are so excited to find that dress that they have dreamed about, the one that will make heads turn and garner compliments from her friends.”

Jay Reynolds created his first sequin gowns at the mere age of 13, when he fashioned costumes for his traveling magic show, performing at parties and area malls. By college, Jay was running his own costume shop. He entered pageant 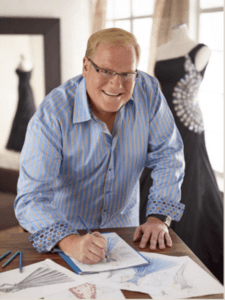 But, Jay’s First collection was the one that made heads turn and landed him in major retail stores across the nation – “Trash Bag Dresses.” At the time, he was involved with local fashion school and was invited to participate in a benefit featuring “poor quality” designs. Jay’s interpretation was to create a collection of Dior inspired ball gowns in camouflage and heavy black plastic. His success at the benefit, not only launched him into retail stores, but he also began designing for names like Sandra Bullock, Kirsten Dunst, Kristie Alley, RuPaul, and was the chosen designer for gowns worn by athletes during Gold Medal Ceremonies at the 1996 Atlanta Olympics. 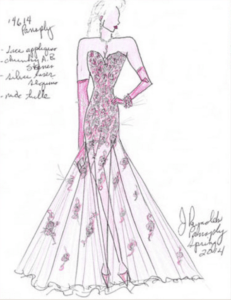 While household designer names like Yves St Laurent and Karl Lagerfeld have influenced Jay’s creative process over the years, Middle Eastern designers Elie Saab and Zuhair Murad currently inspire him. Their use of sheer, metallic laces and heavy beading have carried over into some of Hay’s designs in House of Wu’s Panoply collection. He draws his color palette from nature – vibrant colors from tropical fish, parrot feathers or the rise and fall of the sun. Material preference changes along with the fashion industry; chiffon is his new favorite, which recently replaced charmeuse.

“Fashion design is fluid, it moves,” said Jay. “Pastels become saturated in the market, we move to jewel tones, then to darker colors then back to pastels. You find that fashion has a 30-year cycle. What was in fashion in the 50’s was in style in the 90’s, and 90’s is coming back into style now.”